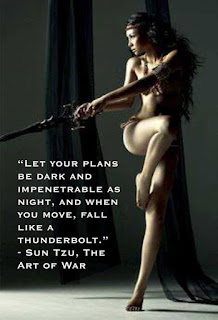 Someone was saying @unless something were to happen to someone i know personally...
Right... Most humans think and feel like that. And this CAUSES and CONTINUES the situation we are in.

When only ONE living being is suffering because of a sick corrupted system that is ONE to many. This is Real Love in action. All other stuff is about the i and the 'pain' the i experience in their own life with their own 'small' problems.


Do we humans still do not see the bigger picture?
Someone was saying: @I would gladly sacrifice a few million human lives on this planet to save a single creature that happens to be a member of a species hunted to dwindling numbers.

Well the truth is... Humanity IS the specie hunted to dwindling numbers. Cann't you see?

I perceive this world from Unity where ALL is equal. And I want ALL suffering to stop. Now!


Well, do I have a plan?
I know the whole world is waiting for a plan. I am not.

I simply stand for the freedom of ALL living beings.

I am a feminine warrior because I live from the feminine principle. Life is perfectly capable to live itself without any interference. So stop interfering life flowing in its own context.

mascha Vdf roedelof (Het Bewuste Pad)
I’m a beholder of a totally new space. I long to live together on earth. So I do. I do not tax anyone in anyway. I’m sharing the Circle of Life from which we share free entrance to life together. We Are All Invited and We Are all Connected