Start with the Youngsters 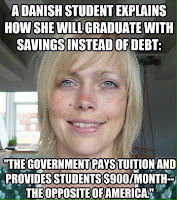 
No politics and govts as we know them
And be aware: we do not need politics for this, we need ourselves for this. We are perfectly capable to govern ourselves.


Be aware this image is a political statement they use 'Bernie Sanders for President 2016' in Denmark.

I am not using this statement as a political statement, since I know we do not need governments as we know them. Replacing one from the other will not transform anything because the system will be still the same. The only reason one can become a politician is playing the political game. And the 'higher' up you want as a politician the more you have to fit in otherwise you do not get that position. Not sure about Denmark though. People from Denmark are saying its all the same in Denmark and Iceland is a distraction as well: nothing transformed in Iceland... grow in your discernment. Nothing transformed in the Northern Countries.


YOUNGSTERS FIRST, NOT MODELS, NOR TECHNOLOGY
Most (business model) solutions which are created are still IN the corrupt system.

Imagine the world... the whole world...
Within this world a group of humans is becoming more aware of the huge corruption.

The analyzing is done... that's totally done... we are already moved beyond the analyzing... so the group of humans who are becoming more aware of the corruption / the matrix / overlay's / co-option is growing WITHIN the image of the whole world.

So imagine the whole world as a circle... within this circle another circle is becoming and is growing... but is still WITHIN the corrupted world: there is NO transition IN this group. When we talk about the current financial system LETS is an example of a solution within the 'old', within the current financial system. Also 'free energy devices' are a solution within the 'old' because huge amount of 'old' money flows to a project... but it should flow to peoples Free Existence and FREEDOM from the financial tyranny (humans ARE Free Energy ALREADY: from TRUE FREEDOM 'new' technologies comes into existence: HUMANS FIRST, not projects!

Now imagine the whole corrupted world and the group awakened ones WITHIN this world... and a totally new circle without the corruptions, the banks, the government, taxation, ruling over, powering over, steering, pyramid structures, business models as we know them, identification as we know them, boarders as we know them, the overlay's, the co-options, etc.

Few of the awakened ones have 'moved' beyond the corrupted world into this 'new fresh circle' and are consciously co-creating and building a totally 'New Earth' which is already here and is lived already... by very few... so this 'New Earth' is not growing...


The 'movement' to the New Earth IS the transition. But this is not an outer 'movement': this 'movement' is an inner one, you are 'moving' inner.

mascha Vdf roedelof (Het Bewuste Pad)
I’m a beholder of a totally new space. I long to live together on earth. So I do. I do not tax anyone in anyway. I’m sharing the Circle of Life from which we share free entrance to life together. We Are All Invited and We Are all Connected